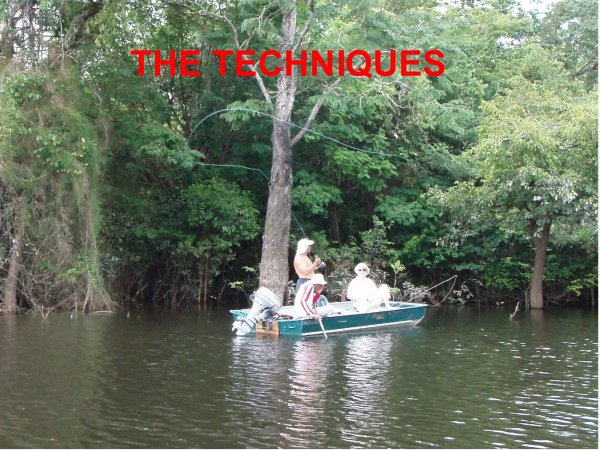 In reality,  there is not one but several techniques for each fish, according to  various factors that are  seasons,  water levels,  fishing places and  local food. Also we recommend you to go to chapters devoted to species where each case is considered individually, even though there is constancy in the way to proceed. Flyfishing on this type of waters, is pure provocation fishing. It consists to arouse the agressivity of predators by offering suggestions or imitations of what constitues its habitual or casual menu, and going on to solicit it into his hiding or lurking-place.The fish is rarely marauding, with the exception of course of major species such as tarpon or arapaima, that beyond a certain size, dont know other predators than  big Amazonia otters or caimans. 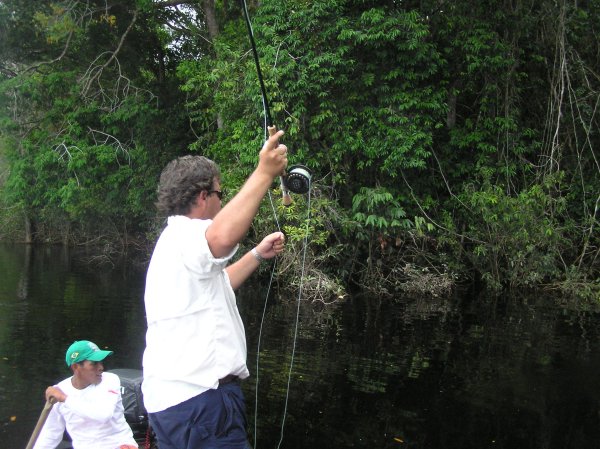 Casting to a big one spot

Of course we'll have to consider the multiples parameters that are water color, sunshine, temperature, factors sometimes combined with the influence of the tides in coastal zone. But all these datas are universal regardless of the latitudes in which we operate. A predator stays a predator whatever the place in the world where you stretch your fly line. Nothing looks more like a carnivorous lurking-place than an other carnivorous lurking-place. Dead woods, shoreline foliages, grass-beds, excavations in the bank, rocky caches, are common to all game fishes of the globe.

In Amazonian waters, predatory fish is very aggressive, probably more than anywhere else on the planet. Its attacks always occur in haste, because by leaving even during a flash of lighning its cache for so-called solitaries species, or temporarely abandonning the collective protection of its likes for so-called gregarious species, it's taking  the risk, going  to acomplish a predation, to become oneself the prey of an other specie,  or of a larger congenery, because here as elsewhere, the canibalism is the rule. In brieve, survival stays in absolute immobility or mimesis.

So, each  movement must go fastly. In this environment, any exceptional or abnormal behavior is automatically regulated by all sorts of cleaners and eliminators of the river which the piranhas are the most famous.This is indubitably what explains the reasons why a fast stripped fly generates more attacks than a slower stripped one with a feint hesitation, as in the case of  flyfishing for pike or musky for example. We'll rarely assist to the spectacle of a carnivorous slowly following your imitation, before swallowing it, but almost always to flashy-attacks of fishes arose from nowhere. This is particularly true in acid and poor biogenic midst as the dark waters of the rio Negro basin, for example, where the low abundance of bait-fish, turn every fry swimming far away from its territory, an alimentary opportunity that must not be let slip away.

It's a methodic prospection of fishing posts and manifestations of fish activity at the surface. So, flyfishing becomes a real competitor of lure casting or spinning, with streamers and poppers whose actions, appearances, sizes and colours remain  wobblers and  stick-baits. Everywhere we can cast spinning lures, we also can flyfish, and reciprocaly.

So It's no uncommon to see a flyfisherman and a fisherman whith lures operating together on the same boat in a perfect osmosis.