cichla s.p.p of the cichlidae family 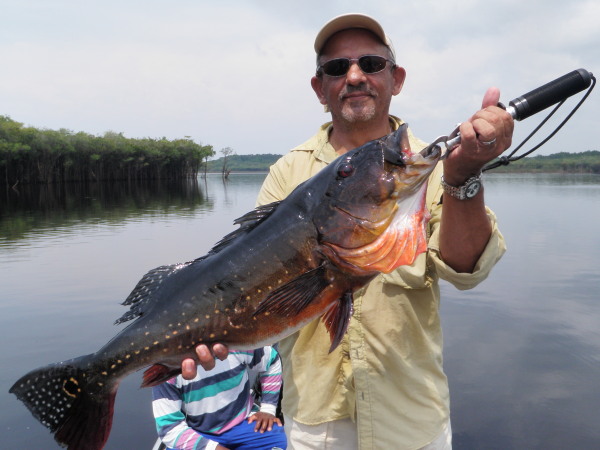 The peacock bass, called pavon in Venezuela and Colombia, tucunaré* in Brazil and Peru, is represented by at least 15 species indexed in south America ( ichtyology studies of Efrem Ferreira and Sven Kullander). In reality, there would be only five species. The others would be the result of chromatic adapations to the environment, or more simply hybrides.

The best known and widely targeted are ( species and subspecies confounded): 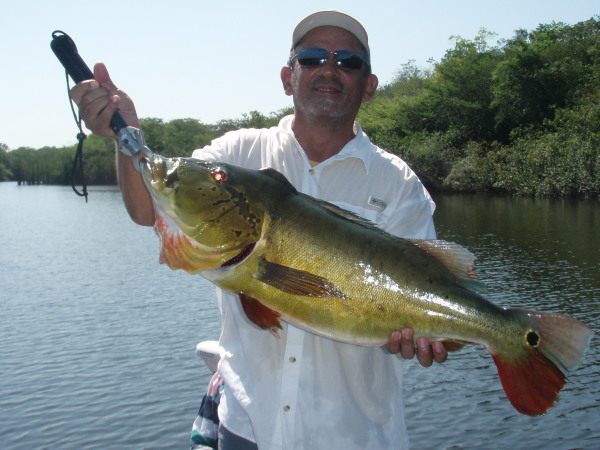 The tucunare paca or speckled peacock-bass, a little bit dark, with white to light yellow broken lines running in horizontaly along the length of the body. According to the specialists, it would be also a cichla temensis that can reach a high weight. It's the most ferocious fighter of all the cichlids. The current IGFA world record is a paca. This subspecie seems to  like the moving waters.

Cichla vazzoreli and Thyrosus, often confounded with cichla temensis but whose stripes are more longitudinals blotches than zebra markings. Also exists the " paca" version of these varieties  which live in the Trombetas/Nhamunda rivers basin, and that can  also reach  a high weight.  Then, Cichla pinima  very alike, that can reach 15 pounds, and is found principaly in tributaries of the Madeira , Tapajos rivers and also in some waters of the state of Amapa. 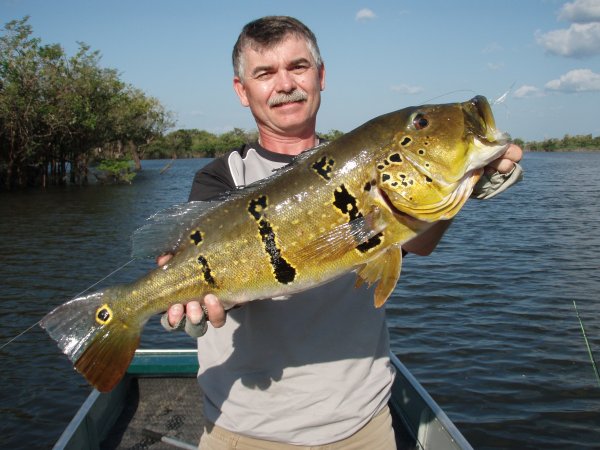 The tucunare amarelo ( cichla monoculus) or yellow peacock-bass, the most widespread in the Amazon basin, whose weight doesn't exceed 12 lbs, in theory. 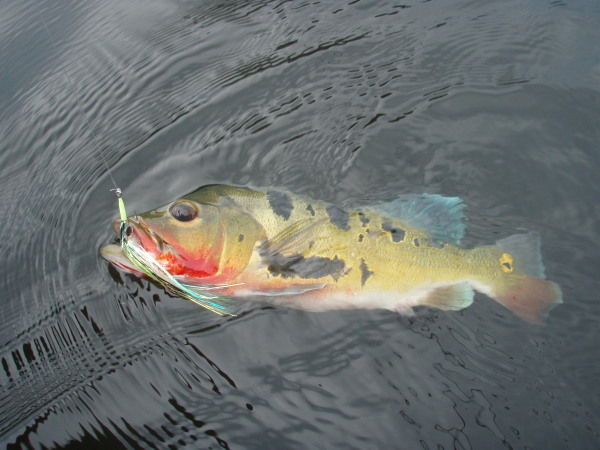 Cichla intermedia or royal peacock-bass that doesn't grow very much. May be 8 to 10 Lbs. Mainly found in the currents  of the highlands tributaries of the Negro and Orinoco rivers watersheld. 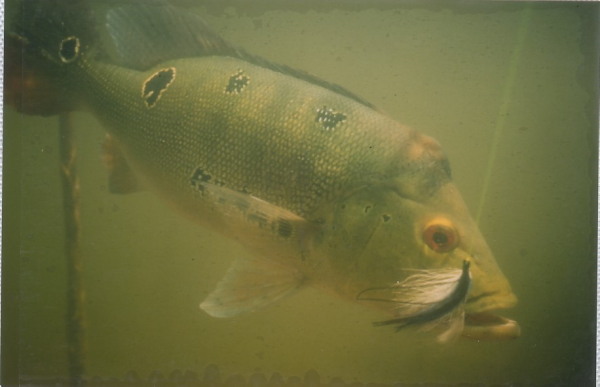 Cichla ocellaris which  body is  spotted of ocellus as its scientific name suggests it, or butterfly variant peacock-bass, reaching sensibly the same weight, very present in Surinam and Maroni river in French Guiana. Also introduced  in the Florida system of canals, and in Hawaii too. Maximum  (1) theoric weight: 12/13 lbs.

(1) Captures of 20 pounders ocellaris have been reported.

Tucunare borboleta or butterfly peacock-bass ( cichla orinocensis)  which body is spotted with three caracteristic blotches. Specific to the Orinoco river and upper Rio Negro, watersheds that are linked by the intermediate of a natural channel called Casiquiare. Maximum theoric weight: 10/12 lbs

cichla piquiti,  the tucunare azul ( blue) which body is  black-blue barred, or blue peacock-bass, inhabiting principaly  the south of Amazonia, particularly the basin of Araguaia/Tocantins.And in the same basin cichla kleberti that looks like the tucunaré amarelo or yellow peacock-bass.

The peacock-bass is found in rather shallow places very encumbered by dead wood structures and rocks, and especially everywhere the rivers are widening and form lagoons. The mouths of lakes and little tributaries are good spots too. Other good places are the shoreline of sunken forest.  At the end of the rainy season, the peacock is found feeding voraciously and noisily in the flooded forest, before the baitfish and other preys return to the rivers and lakes, when  the water level begins to low.

Its pursuit with streamers and poppers with appropriate lines in function of the water temperature and level is simply fascinating. With a behavior quite similar to that of the centrarchidae, the peacock-bass will be seduced by the techniques used by flyfishermen for large-mouth bass, provided however, that they ensure to " vitaminize" somewhat the power of their tackle. Indeed, the tucunare is the devil in person, and he will use every unexpected, even tiny opportunity, to escape and to show us  a brilliant demonstration of the limits of our tackle.

The peacock-bass is well known and renowned for its spectacular attacks on surface lures. Sometimes they are true explosions that elevate the level of adrenaline at its height. Indeed, nothing is more beautiful and exciting for a flyfisherman, to assist to this phenomenal assault on a popper judiciously cast and strip on an expected place.

But this type of attack is far from beeing a generality: In streamer fishing for example. Indeed we  have witnessed repeatedly, by sight fishing conditions in transparent water that the engamage of the fly was sometimes a simple act of predation, without any agressivity, which could be compared to the taking of a nymph by a trout. A streamer is rarely considered by the peacock as an intruder threatening its territorial integrity, but rather as a potential prey lost outside its habitat, while a popper, with its noisy and disturbing swim, its volume, its abnormal appearence is perceived by the predator as a real territorial aggression that he must immediately eliminate or at least blow out of an area where it should no be.

8 to 10 range, according to the average size of the fishes in the area, and also to do the long and accurate cast with bulky flies and poppers necessary to reach the right places. But still prefer a solid n° 10. Even  if the cichla temensis or tucunare açu is absent of the sector, be aware that a "small" 8 to 10 pounder peacock is able to "explode" easely a 20 lbs tippet**, or even a rod on a violent rush. But, if you have  only a n° 8  to opposite  to such demonious, you will suffer some problems. Thus, dont't hesitate to fish " tough". According to the circumstances, when we really want to get a lot of fun, we don't hesitate to use a solid 30 to 40 Lbs  leader. And sometimes, it's not enough... Some experiments with the rio Negro giants have learned us to take some precautions...

** if you purchase records, following the rules, you can't exceed a 20 lbs class tippet. But even such a resistance will not be sufficient if you cast near the rocky and sunken forest structures. Indeed, any hooked ten pounder peacock-bass that you'll tempt to prevent to run away into the  jungle  will break your tippet like a sewing thread. So work preferencially  beaches, sand benches edges, and all kinds of flats where large fishes use to stay too.  And don't waste your time casting a 12 lbs tippet near the structures, unless you have a bulky fly-box...

There is an other way safer to match a record: look for fishes cruising in open water. There is a natural behaviour specific of the peacock-bass and cichlids in general that consists in escorting and protecting the progeny for the first weeks after the eggs hatching in the middle of the lagoons or rivers far from the shorelines where a lot of toothy and fierce creatures are waiting for all kinds of fries. These nurseries look to the surface like small rain drops, also called " bubbies". It's obvious that any fly thrown on these manifestations will be attacked with ferocity, and in open water, far from any  dangerous structure, you will comfortably play a huge fish even on a 12 to 16 lbs tippet.

But for reasons of ethic, and if you are preoccupied by the perenniality of the specie, don't do it, even if you are a convinced adept of  catch and release. For a simple reason: during the fight, and after, during the time of recovery of the fish, it cannot more protect its school of babies that risks to be attacked and eaten by all kind of other predators, even  by other... peacock-bass.

You need a good model,  baby-tarpon/snook type, with a smooth  and powerfull disc brake to prevent the breakage of the tippet or even the rod on violent rushes.

The number of the line will be adapted to the power of the rod:

- floating for streamer and popper fishing and normal water ( neither too high, nor too low)

- intermediate for streamer only when the nivel of the water is a little bit high.

- floating with high density tip( 200/300 grains), for little high water in the early season, or by warm and low water, when the fish seeks coolness in the depht.

It consists in a systematic exploration of all possible bank and shoreline posts, sunken logs, fallen trees, bogs, rocky structures, and under overhanging vegetation, all great places for peacock-bass. Always favour the still parts of the river with a depht average of 2 to 3 meters. Insist particularly on the mouths of smaller tributaries, and lakes. That are places where it's necessary to focalize your action  because they are often  locations of huge fishes.

One wrongly believed that the attack of the peacock will occur immediatly or never, as this fish has a reputation of extreme agressivity. But after observing during numerous opportunities its behaviour against our flies, we do afirm that it's not always true. Indeed, it's often to the third, fourth, even firth presentation of the streamer that our peacock will decide himself, after beeing feigned an absolute indifference. So, don't prospect too hasty a place that inspires you. Your perseverance will often be rewarded.

An other strategy that also gives good results: take advantage of your false casts, and let the fly touching or even hitting the surface at every front cast, close to the coveted post, before the final shoot. This tactic will have the effect to arouse the attention of the peacock-bass which is a very curious and little spooky fish. Then, after your streamer have hitten the water several times, let it sink a little, and begin to strip rapidly with short pauses... The peacock, attracted by the noise emerges from its cache and comes to see what happens, and may be...

We also have observed the natives of amazonian rivers, brewing the water with the point of their rod or with the hand, imitating the splashy noise of the baitfish's running away under the chases of the predators. Then it only have to cast its bait or lure as far as possible, and to retrieve it following a sawtooth line animation. The results are as surprising as the tackle is rudimentary.

And to conclude: the example of this  guide which we have learned to flyfish. This extremely clever guy, combinating traditions and modernity, and taking advantage of its more efficient new outfit, get results able to give complexes to the better specialist of tropical flyfishing. So, it's always good to observe the way to fish of the natives . Their ancestral techniques have certainly excellent reasons to be.

Virtually all models of streamers and poppers are well accepted by the peacock-bass, but accord priority to the size of your imitations. Indeed, the slogan: "big fly, big fish" finds here its whole illustration. The tucunare has "eyes bigger than the belly", and even small peacocks don't hesitate to attack a bulky streamer. Large specimens rarely move when the bite is not worthwhile. So we'll recommend to you to use principally synthetic materials to dress yours peacock-bass patterns. These hydrophobic materials  absorb less water than the traditional feathers and other natural hairs, and dry in a few false casts. It becomes possible to dress very large and giants flies that stay relatively easy to cast. So,  if you want to catch a true big one,dont hesitate to use a 10 inches streamer.

The poppers are premium generators of explosive attacks, particularly when the  level of  water begins seriously to lower.