megalops atlanticus of the cupleidae family 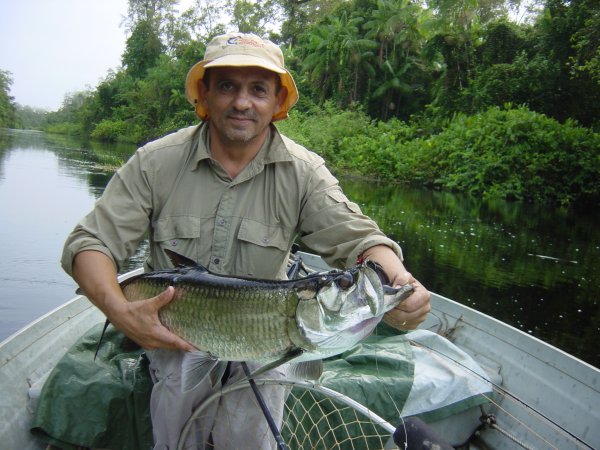 Also called pirapema, camurupim in Brazil, sabalo in Venezuela, palika in French Guiana, it's not necessary to present this extraordinary game fish which is probably at the origin of many addictions for tropical flyfishing. Indeed, the infortunate who enjoyed the incomparable pleasure of the capture of the " silver king" on, is instantily and irretrievably struck by an  incurable addiction, the only treatment of which is a diligent and obsessing quest of its responsible all over the mangroves and flats of the tropical Atlantic Ocean.

If the perrenial stereotype of the tarpon's waters are the blue swimming-pool coloured flats of Florida, Belize and Yucatan, we have to know that our animal is a fish definited as " euryallin", scientific term that means: able to live both in fresh and salt water.  So, with a top period during the rainy season, we can abundantly found it in tropical mangroves, coastal rivers and lagoons of Amazonia.

tarpons rolling in the mangrove

The tarpon, like the eel borns in the sea, and comes to grow in brackish and fresh water, in tidal streams that it ascents sometimes on several dozens of miles. He finds here food in abundance firstly under the form of plancton when it is still a leptocephallus larva, and soon, of shrimps and other crustaceans, molluscs, fries and baitfish when it had adquired  some weight. When it will reach to sexual maturity, it will be able to return to the ocean to find the spawning areas.

Expecting this phase, our fish has a phenomenal appetite necessary to attain its full growth, and so much the better for us... With an average weight of 2 to 10 pounds, with sometimes an exception in the form of some " teenagers"  or sedentary adults, angling these fishes with a fly rod is an absolute happiness. Still maraudind along the mangrove roots, they are easy to localize, when rolling ( rising) to the surface to inhale atmospheric oxygen like the arapaimas. It's only to cast on these eddies and to strip the fly...

N° 8 to 10 rod, according to the average size of the fishes of the spot. Floating line, if you also want to use poppers, or intermediate, if you fish only with streamers. High quality disc brake reel with plenty of backing, because if the majority of the fishes don't exceed 20 pounds, it's quite possible to hook a giant of the specie that sometimes haunt the mangroves. And, don't forget to use a 50 to 80 lbs hard mono or fluorocarbon shock-tippet.

Exploring by boat the mangrove edges, target principally the rolling fishes and throw your fly above them... In general, the further from the roots, the bigger the fishes... here begins your problems...

Conventional tarpon flies " key style", lefty deceivers, seaducers, shrimp-flies, clousers, surf-candies, poppers, all patterns whose colours may accord to the tint and the clarity of the water. But look for clear water mangroves. The muddy ones don't worth much, even if there are plenty of fishes rolling around your boat. 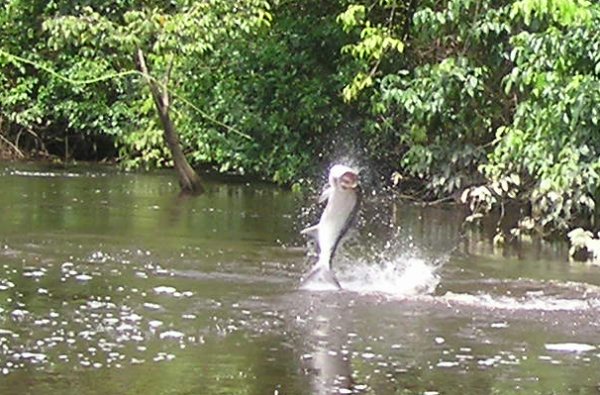 tarpon leaping in a coastal river