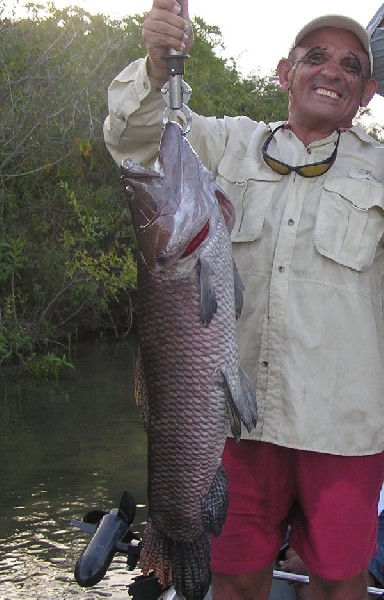 This carnivorous, also called trairão in Brazil and aymara in French Guiana for the largest specie  that can reach 50 to 60 Lbs*,  and traira and patagaye for the smallest that doesn't overweight 4 to 5 lbs, has probably never evoluted since the secondary era. It's a very strange coelacanth looking predator, with a stocky morphology, all muscle built, dark coloured, with a crocodile's like sharpy dentition. The facial angle of our animal gives an impression of primary bestiality. Fish of the jungle type, the trahira lives into it's cache, in structures of dead and sunken wood, in caves of the rocks, and in excavations of the bank. Keeping one's ear open to any vibration going including from the surface, our predator springs up ferouciously out of its lair to capture its prey that can be as well a fish, as a splashing bird, a little mammal, a foot... Or any other human appendage. What happens very rarely, as it's true that the trahira's habitat doesn't convite to bath.

The rod will be a formidable cudgel provided for a minimum n° 10 line, of which only the tip have a certain mobility to animate the huge streamers and sea-poppers that we'll send noisily to our caves's fish. It's advisable to overload the rod with a number of line. This will facilitate the casting of oversized flies.

The reel will have a strong and smooth disc brake to prevent the vigourous rushes of the trahira. 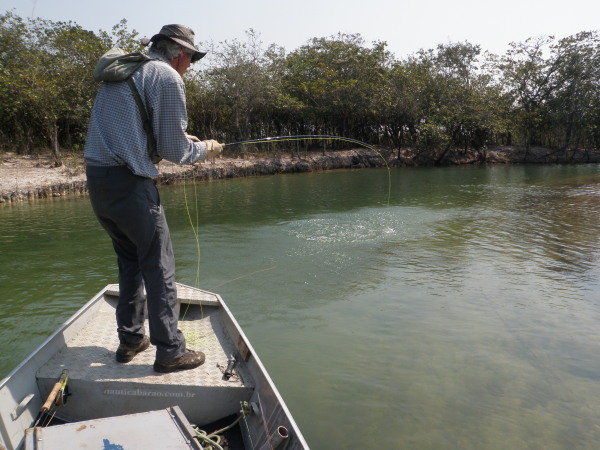 We'll lie flat with brutality our flies against the surface with a repetitive insistence close to any supposed post and potential cache, in order to awake and attract the attention of our "client" that will reward us with spectacular " geyser" attacks. Adrenaline guaranteed...Sometimes, when the level of the water is particularly low, you have to let sinking your fly and to retreive very slowly, exactly as in pike flyfishing...

The flies are bulky, even dressed with a "rattle-box" included, in the style of those used for arapaima fishing. Large tube-flies, tandems for sailfish, sea-poppers, etc. And don't forget to use a wire or a large diameter fluorocarbon shock-tippet.

* If almost everywhere in Amazonia, according to experienced guides, a 20 pounder trahira is considered as a big, and even a trophy, on the other hand, in French Guiana particularly on the upper Sinnamary river upstream  of the hydrolectric dam of Petit-Saut, 30  pounder trahiras ar not very rare. Genetic particularity, or surabundance of fish ever little pursuited? We hope it's will last for a long time...