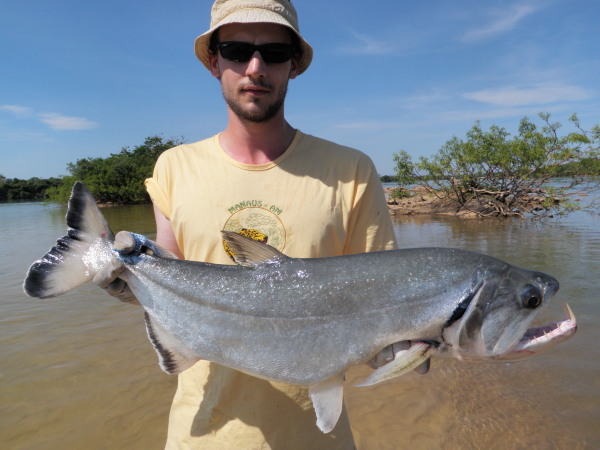 a 20 pounder payara of the upper Xingu river

This fish is the predator pre-eminently. With its huge teeth like the ones of its african cousin the tiger fish, it almost relegates the piranha, an other relative, also member of the " sharpened teeth brotherhood" to the rank of ruminant. Its mouth, largely split  back to the eye, that can open in right angle, is characterized by two oversized canines that protrude from the lower jaw, but fit nearly into two cavities in the upper jaw. The other dozens of teeth are smaller and sharpened like needles. It's obvious that anyone baitfish can escape from such a mouth. These jaws are almost concrete-hard, and it's tough to set the hook.

The morphology of our animal remembers the salmonids'one. One could definite the payara as a kind of steelhead with  big game jaws. It can exceed thirty pounds. The payara stays behind the rocks, watching the currents, including those with an extreme violence and turbulence. Indeed, a streamer cast in the middle of this furious water, even with the help of a deep water express line, as soon as layed down , would be  instantanely swept down, after having miserably dragged to the surface without working. And yet the payara, on its lurking place, all senses in alert, will not tolerate the slightest intrusion of eatable appearance in its territory.

So did we ever assist, incredulous to this flashy attack in an unthinkable current, to realize that we were dealing with an uncommon predator.

One meet the payara in virtually all the tributaries of the Amazon and Orinoco rivers, and in the Essequibo river basin in Guyana too, mainly in the rapids, upstream and downstream  of the falls, and more generally, everywhere the rivers go through relief areas. It exists other subspecies like the interesting raphiodon vulpinus, called "cachorra facão" by the brazilians. 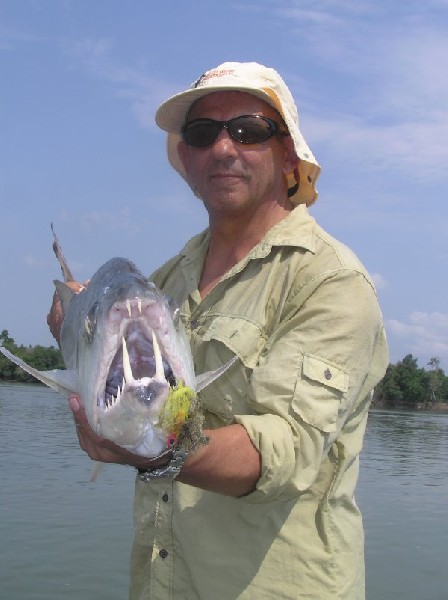 Dont forget the wire tippet!! the large EPfly was totally destroyed by the huge jaws

Tip action rod, 9 feet with an average power of 9 to 10. Reel saltwater baby-tarpon/bonefish type, with a good length of backing, because the payara is a hard fighter that does fast runs and spectacular leaps. Fly line sinking (I or II), or floating with high density sinking tip ( 200/400 grains), style " Teeny nymph". And don't forget to end your leader with a wire shock tippet.

There is three ways to proceed, according to the circumstances.

Downstream technique: like salmon or steelhead fishing. Cast your line slightly downstream across the river, and mend it. Then, let your fly drift, animating it with the point of the rod, and focusing on the hot spots as begginings and ends of pools, or any other points located upstream and downstream of the obstacles. A two hand rod would be more suitable, because it would allow a better control of the line and a more thorough exploration of the posts.

Upstream technique: rod in the hand, intermediate to sinking (I or II) line, prospect upstream all the currents, with a systematic research of the posts. Control the drift of the fly which may be slightly faster than the speed of the water. If you are using an intermediate line, the fly has to be weighted ( clouser with deep water eyes, streamer " conehead", etc.) The contact with the fly must be permanent. The payaras arose from nowhere, attack with the vivacity of lightning. It's often a rich visual emotion fishing.

Deep water techniques: during the dry season, when the water is warm, it occurs that the payaras stay in deep pools, to get some coolness. The best technique in this case, is to use a deep water express line (750 gr), a short leader and large and bulky flies type " whistler"  used in the murky waters of the coastal tarpon rivers of Costa Rica. Throw the line up-stream and let sink to the bottom. Strip slowly... May be It's the better way to catch a trophy payara.

All large flies are accepted, even the poppers by the payara. If you dress your own patterns,  use largely flashy  material: the payara seems to be attracted by the shiny streamers. Tandem flies are also a good choice because of the hardness of the payara's mouth. 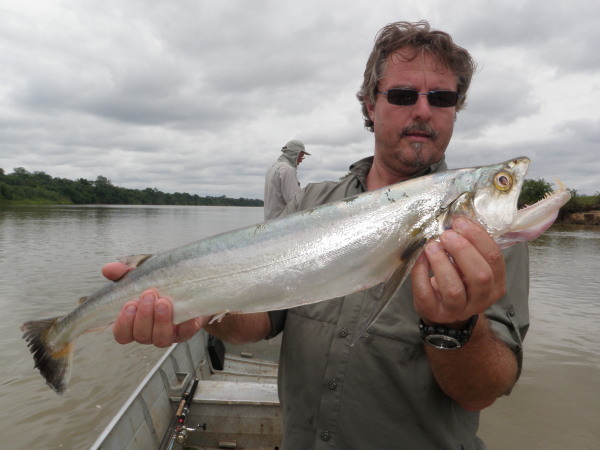 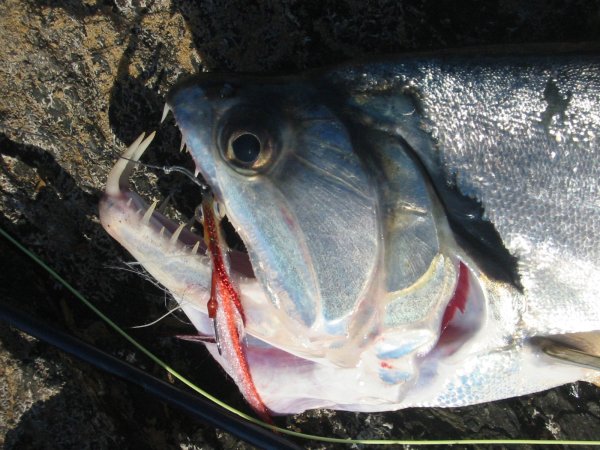