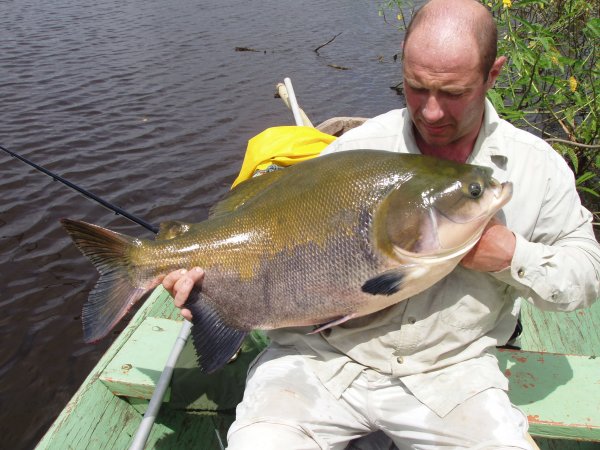 This colossal pacu can reach about 90 pounds, when one lets it the time to grow to such a weight, as its flesh is estimated by the natives which infortunately make it a trade. But fortulately, this fish is very easy to stock-breed, and since a little time appeared in Amazonia fish-farms specialized in tambaqui. And its so much the better for wild fishes... Nethertheless, 10, 15 and 20 pounders are not too rare. Like all the pacus, the tambaqui is essentially seed and fruit eater, but frequent catches with meat baits, chunks of fish, shrimps, crabs, attest that it's an omnivorous, perhaps with a propensity for vegetarian food. Indeed, it's frequently observed posted under the overhanging palm and fruit trees, waiting for the falldown of its food that it swallows with splashing rises able to provoke infarcts to emotive flyfishermen.

Can we catch the tambaqui on fly? On fly, may be no, according to the entomological sense of the term, but with a flyfishing tackle, the answer is indoubtedly: yes. Indeed, the Amazonia natives capture it, using a method quite similar to ours , with the help of a long rod made with a tropical wood extremely stout and flexible, and instead of the line, a thick cordon two or three times longer than the rod, and as fly, simply one of the fruits which the tambaqui uses to feed with. This technique named in Brazil " batida"( litteraly: beating), consists to whip the fruit making it curtly hitting the surface close to areas where tambaquis were localized, for example beneath the overhanging foliages. This noise, simulating the fall of fruits to the surface, awakes the attention of the fish that in the better case,  rises to gulp the bait down... It's clear that we have invented nothing...We never had the opportunity to attend the show, for the simple reason that the prime period for the tambaqui is the rainy season which is not the most enjoyable in Amazonia, and especially in the heart of the flooded forest, where this fish principaly uses to feed. However, it's not really the better period for other more traditionnal flyfishing species. But many reliables testimonies attest the effectiveness of this modality. A summary of the traditionnal technique and of our modern way to proceed is it possible? We do believe it. Indeed, some south-american flyfishing masters have already discuss the question, and developped very realistic seed and fruit patterns, which work very well with other varieties of vegetarian characidaes, whose behaviour is similar to the tambaqui's one. Il would be necessary to devote an entire stay to this fish on the fly. We'll do it... 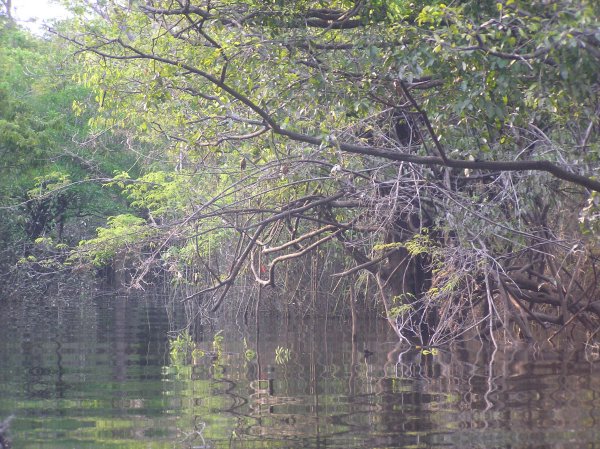 flooded forest during the rainy season

Very tough: rod n° 10, or even n° 11, with a huge backbone, because the tambaqui is a tremendous and vicious fighter. I still remember this day when I was fishing the arapaima in an Island of the Amazon Delta. The bait initially destined to the arapaimas, were swallowed by a tambaqui which despite its " modest" 20 pounds, opposed to us a fight at least as hard than a twice as big arapaima's one. Good quality tarpon type disc-brake reel with a good length of backing. Floating line if you want to imitate the technique known as " batida", but with... Real artificial flies of course, or intermediate if you prefer to prospect beneath the surface with more traditional flies.

Target the surface manifestations under the overhanging trees, an fish like if it were salmonids. let your fly sink, and strip slowly, with little pauses.

Streamers that work with other pacus ( see Chapt. Pacus), and... Seed-flies.